The business is closely involved with the local community, and participate fully in the town’s Christmas celebrations, particularly the annual Dickensian Evening, and associated window-dressing competition for shops and businesses in Tavistock.

Hansford Bell wished to create a striking and unusual display, including a stylised townscape of Tavistock, with local buildings and landmarks included, alongside local people and members of the Hansford Bell team. 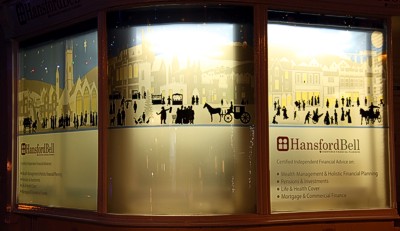 Graphic Words developed a design showing key buildings from around the town – including St Eustachius’ parish church, the town hall, abbey gate, Bedford Hotel and statue of Sir Francis Drake. Local landmarks were included in the background – such as Brentor and  Dartmoor features – and seasonal constellations spread across the sky. Silhouettes of key local personalities, including the mayor, town crier, vicar and church choir were shown in the foreground, alongside members of the Hansford Bell team – but all given a “Victorian” makeover, to create an impression of the town in the 19th century, linking in with the “Dickensian Evening” theme. 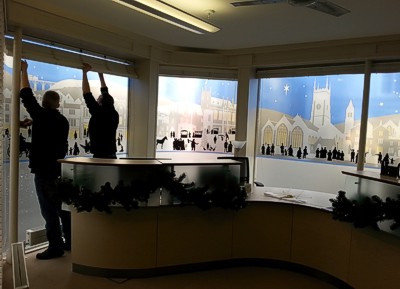 The scene was designed in muted blues and greys, with bright windows suggesting warm and well-lit interiors. When back-lit, this gave the impression of a busy town on a mid-winter evening.

For the first two years, the displays were produced as large format vinyl window graphics, mounted inside the existing glass windows and allowing the interior lights to shine through and illuminate the scene as the light faded outside on winter afternoons. The window vinyls were printed and skilfully fitted by Tavy Signs of Tavistock. 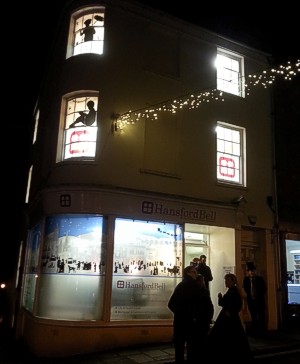 In 2014, the Christmas window designs were updated to include some recent developments in Tavistock – which were again re-cast in a Victorian guise. In addition, Graphic Words developed designs for the upstairs windows of the Hansford Bell building, creating silhouettes of a Victorian boy reading a book by candle-light for the first floor window, and a Victorian boy chimney sweep gazing out on the festivities from the room above. In a prominent position on the corner of one of the main streets in the centre of the town, the graphics were seen and admired by many local people, and were beginning to become an established part of Tavistock’s Christmas decoration.

Once again, the graphics were printed on large format window display vinyls by Tavy Signs of Tavistock, who undertook the careful fitting into place.

In 2015, working with Tavy Signs and Dom McCarthy of McCarthy Property Maintenance, we developed an upgraded version of the window displays to overcome the difficulty of back-lighting the graphics at night when the Hansford Bell office was not in use.

Graphic Words re-designed the townscape graphics, which were printed on vinyl and mounted on clear acrylic by Tavy Signs, who profile-cut around the building outlines, leaving a rough edge which reflected more light giving an attractive glowing edge. These were mounted in specially-developed light boxes, built by Dom McCarthy, with LED ribbon tape lights around the inside edges. Graphic Words then designed a separate background layer, again mounted on clear acrylic, which was fixed to the back of the light boxes. The light box units were custom-made to fit in each of Hansford Bell’s shopfront windows. 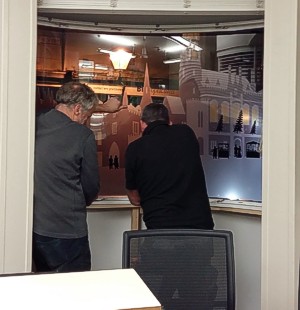 Graphic Words then designed scenes of silhouette figures and objects, which were printed on clear vinyl and mounted on the exterior of the windows, placing the figures in front of the buildings and backdrop and creating a 3-layer, 3-D scene.

The new system also allows for retaining the backdrops whilst annually replacing the silhouette foreground figures, to reflect key events of the previous year in Tavistock.

In 2016, the backgrounds were re-used with fresh silhouette figures in the foreground, updated to reflect events during the year, including the visit of the massive Man Engine puppet to Tavistock, which featured in the window shown at the top of this page.