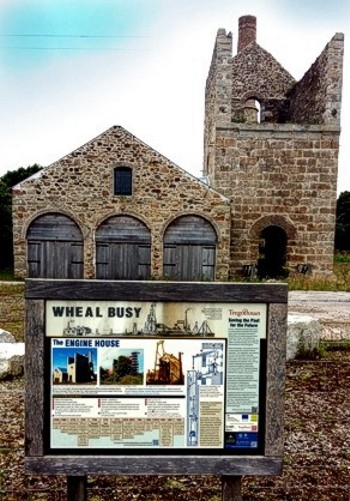 Working with the conservation consultants pwh, and project partners Natural England, the Cornwall and West Devon Mining World Heritage Site and the Tregothnan Estate, Graphic Words created an A1 sized interpretation panel to stand alongside the consolidated engine house at Wheal Busy, located near Chacewater in Cornwall.

We were fortunate to have access to a series of photographs taken from almost the same location, showing the engine house as it looked when operational 1909, prior to conservation work in 2014, and after the works were completed in 2016. Graphic Words undertook additional background research into the Wheal Busy site, which proved to have been a hotbed of technical innovation. Improved waterwheel and horse powered technology was introduced here in the early 18th century, and then a series of improved steam engines – from a Newcomen “atmospheric engine”, through an improved Smeaton engine to the first Boulton and Watt engine to be used in Cornwall, installed here in 1777.

The interpretation board was manufactured as an “nViro” panel, and mounted in a sustainably-sourced oak frame. 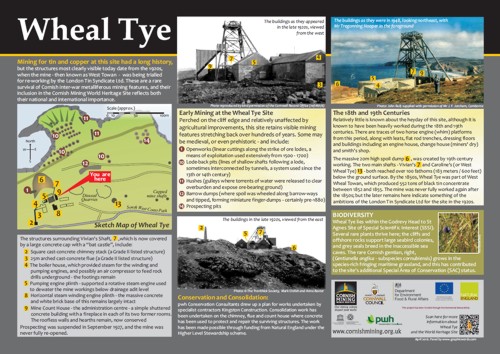 Subsequently, Graphic Words worked with the same project team, with assistance from the Cornwall Council Strategic Historic Environment Team, to design and assemble an interpretation panel for the Wheal Tye site, on the north Cornish coast near Pothtowan.

The site includes remains of operations dating from the medieval period through the 1920s. These latter structures are rare survivals of Cornish inter-war metaliferous mining operations.

The A2 board was fabricated as an “nViro” panel and mounted on the wall of the consolidated count house.

For another example of an interpretation panel at a mine site in Cornwall,  click here>