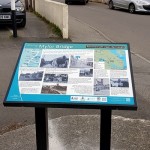 The parish of Mylor lies across the river Fal, just to the north of Falmouth. It has a fascinating history, dating back to the Bronze age. Mylor Churchtown (today known as Mylor Harbour) was once a Royal Navy dockyard, with the training ship HMS Ganges moored just offshore. The port of Flushing was for some years the home of the Packet ships fleet.

Graphic Words was commissioned by the Mylor Local History Group to assist with the production and delivery of a series of four interpretation panels to be located around the parish, providing an introduction to the rich history of the area, and an indication of footpath routes by which visitors and locals could explore.

Following a preliminary site visit, it was decided that the panels would be:

We subsequently provided the Local History Group with assistance in preparing their successful bid for grant funding towards the project.

Working closely with members of the Group, using text and images they supplied, we designed and laid out the four panels, and edited and created maps as required for each. To reflect the area’s long heritage, it was also decided to include  a welcome greeting in the Cornish language on each board.

The information boards were produced as nViro panels, offering a degree of resistance to graffiti and vandalism, and installed by a local firm in March 2019. (As the installation location for the Mylor Bridge panel may be subject to alteration and improvement in the future, a special surface-mounted lectern frame was supplied to facilitate any required relocation at a future date.)