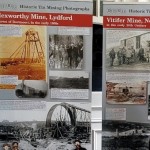 Dartmoor Tinworking Research Group held a major international conference in Tavistock in 2016, and commissioned Graphic Words to produce an exhibition featuring early photographs of tin mining on Dartmoor from the extensive collection of Dr Tom Greeves. Following the conference, the display was intended to go on tour to various venues around the region.

It was therefore decided to produce the display on a series of six large high-quality portable pull-up panels, each 1000 x 2000mm in size.

Graphic Words carefully edited all the historic images to ensure that they yielded the best results possible when enlarged from their original size. We were astonished by the clarity of these pioneering photographs, some of which dated from the 1860s.

In some cases, we used cut-out images of the miners to add impact and human interest to the fascinating story revealed by the images.

The display was well-received and has subsequently been viewed at many locations around Devon and further afield.