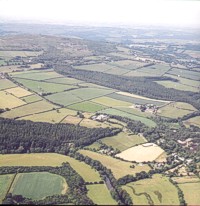 The farming family at Deer Park Farm, near Luckett in Cornwall, are very enthusiastic in educating the public about modern farming and associated issues.

Graphic Words was commissioned to develop an interpretation display for the newly-refurbished Deer Park Farm Education Centre. The challenge was to provide materials which would engage the wide range of visitors to the farm – from groups of young schoolchildren, through members of the U3A, to agriculture students from the nearby Duchy College. 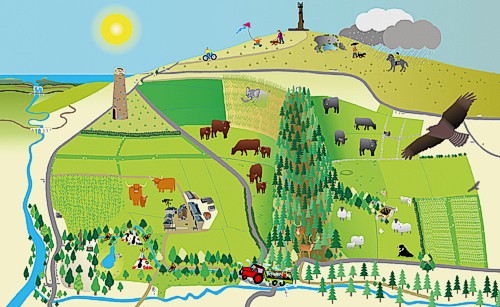 One of the first requirements was to provide an introductory map for use by the farmer as he explained to groups of children what they should look out for on a tour of the farm. Based on aerial photographs and maps, Graphic Words created a bright and colourful aerial view of the area to engage children’s attention. The panel shows prominent features in a lively cartoon style, including different types of cattle, crops, deer in the woodland, mining remains, the farm’s holiday tipis and local landmarks.

The large map (approximately 2 metres wide by 1.2 metres high) was mounted on aluminium composite board for wall mounting. 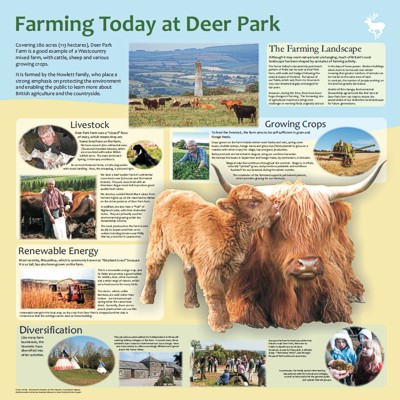 Alongside the map, three large interpretation panels (each 1.2 x 1.2 metres) were developed for the Education Centre. These contained large images to appeal to younger children, but also more detailed information to provide other visitors with an introduction to various aspects of the Farm and its environment and history.

Graphic Words assisted with research and writing the panels, sourced additional photographs and provided graphic elements where needed. We designed and layed out the three complementary panels, and mounted them on aluminium composite board.

The first panel introduces “Farming Today at Deer Park”, with information about crops, livestock, diversification and the changing farming landscape. 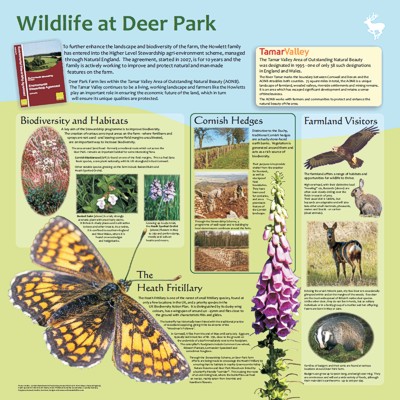 The second interpretation panel looks at “Wildlife at Deer Park”, explaining how the farm is managed to enhance biodiversity and protect valuable habitats for a range of species, including the rare Heath Fritillary butterfly. 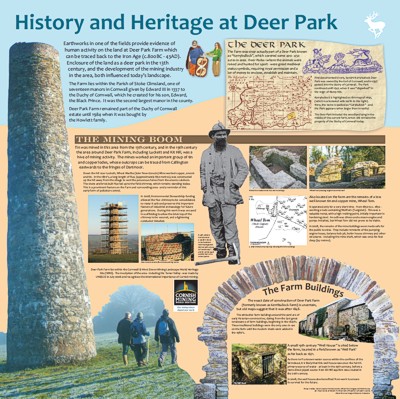 The third panel examines the history of the farm area, which can be traced back to the Iron Age. As its name suggests, the area was once a royal Deer Park, and traces of enclosures still remain. The area was also significant for mineral mining, with nineteenth century mining remains still visible around the Farm. These include the prominent recently consolidated flue chimney, which once served to dispel fumes from the arsenic works down in the village. 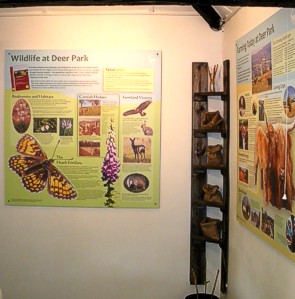 To complement the panels, Graphic Words suggested that timbers from the former double doors of the building should be re-used to provide display shelving and framing for the main map panel. We constructed two “rustic” display shelving units which allow important objects, materials and artifacts to be shown (in small hessian sacks supplied by Graphic Words), and children can bring back “finds” from their farm tour to place here.

The “porthole” style window in the timbers of the former doors of the Education Centre before renovation made a perfect frame for a photograph of the building in its earlier condition.

Deer Park Farm Education Centre was officially opened by the chairman of the National Farmers Union in May 2011. As a final touch, Graphic Words also supplied a panel acknowledging the project’s sponsors and supporters, and a plaque commemorating the opening ceremony.

Graphic Words also created an interpretation board for the consolidated Wheal Tom mine site at Deer Park Farm – for more details, click here>